IOTA is one of the most disruptive projects in the world of digital assets.

Unlike most other developments, which talk about blockchain, the technology behind every cryptocurrency, there is none of that in IOTA. There is no blockchain, validations, miners, or fees.

It can be said that IOTA is a project that although it is part of the cryptocurrency ecosystem, does so on a path that marches on the side of the main “highway” made up of Bitcoin, Ethereum, Cardano, and the Stablecoins.

Its low profile doesn’t make the IOTA project any less ambitious. Nothing of the sort. In fact, it can be said that IOTA is one of the most original developments with the most potential because its ultimate goal is to incorporate cryptocurrencies into the so-called Internet of Things (Internet of Things, IoT).

Created by a set of German developers, it b ases its operation on the technology called Tangle which, according to its advocates, is more scalable, faster, and “lighter” than the logic followed by blockchains.

Those who advocate investing in IOTA claim that it will become the basis of a new industrial revolution sustained on the massive and economic use of the internet of things.

Its founders say that, in the long term, IOTA will be the currency that will serve as a secure exchange in revolutionary megaprojects such as smart cities and intercontinental transport systems, among many other applications. Will this be the case?

Before buying IOTA: What you should know about this cryptocurrency

IOTA and the internet of things

By definition, IOTA is one of many distributed data logging technologies, but which in its case is based on a unique architecture (the aforementioned Tangle) focused on a mathematical concept called Directed Acyclic Graph (DAG).

The IOTA protocol, which like many cryptocurrencies is still in the development phase, was founded in 2016 by David Sonstebo, Sergey Ivancheglo, Dominik Schiener and Serguei Popov, who are part of the IOTA Foundation, a nonprofit organization that is driving the technology and the process of widespread adoption forward. 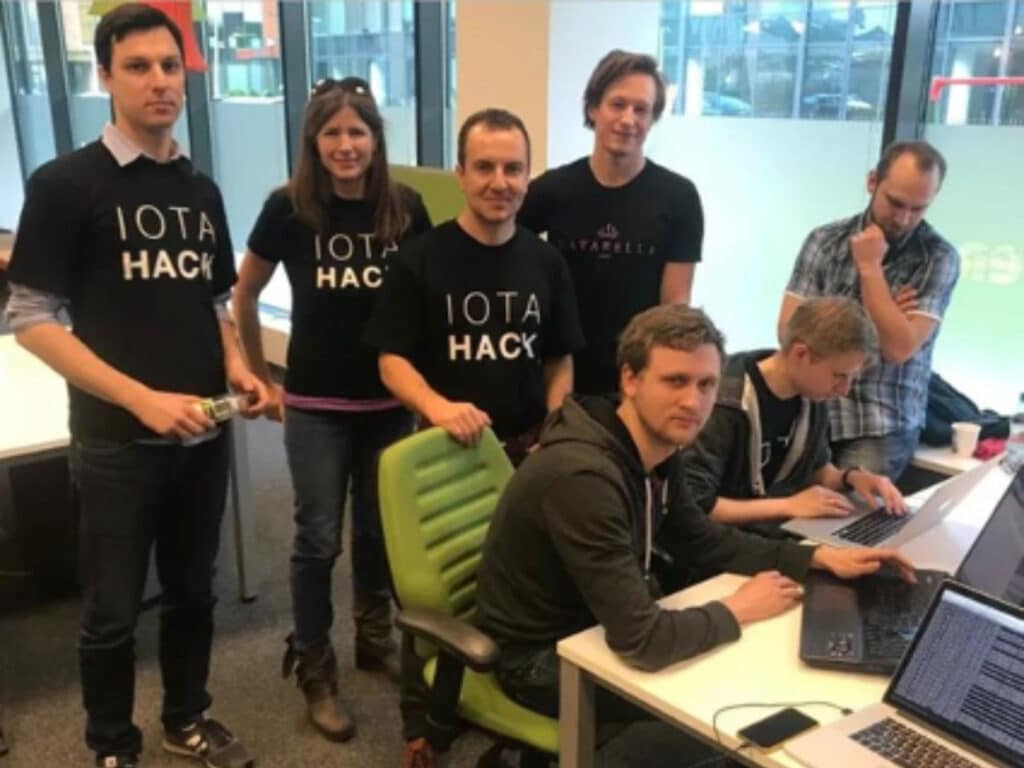 A proof of its constant evolution is that since March 2021, IOTA supports smart contracts. The development was announced at an “IOTA Talk” in which Schiener went over the details and called the development “a new horizon that until a few years ago could not have been imagined”.

At the event, the IOTA co-founder said that the cryptocurrency they founded solves the problems that blockchain has, such as the lack of scalability for smart contracts, the impossibility of suitability for IoT, and the high fees for the use of networks.

Returning to Tangle, the technological platform that underpins IOTA, it must be said that it is a platform of interrelated nodes, but in a different way to blockchains.

Any user of IOTA is obliged to confirm two transactions that are not their own before being able to finalize their own. This is so for two reasons:

Why no commissions? Because as each of the IOTA users must make other people’s transactions before materializing their own, the reward is precisely the possibility of sending or receiving their own cryptocurrencies. In the case of “traditional” mining, miners charge economic incentives to verify third-party transactions.

IOTA has an interesting advantage at this point, which is volume: for now, it has been able to reach 10,000 transactions per second, compared to no more than 10 for bitcoin, 20 for Ethereum, 30 for Dash, and up to 60 for Litecoin.

Moreover, due to IOTA’s architecture, scalability is theoretically unlimited: the more transactions and more nodes connected in Tangle the more the capacity to process transactions increases.

IOTA is synonymous with speed and “zero” fees

The maximum supply of IOTA is 2,779,350,283 tokens, with the entirety in circulation. One million IOTAs make up one Megaiota or MIOTA, as you can see it listed on exchanges because it is the unit used for buying and selling assets.

When the Foundation launched the collective sale, 999 million utility tokens (which is not the same as profit-sharing coins) were traded. This produced revenues of 1,330 bitcoins. Each BTC, at that time, was worth $320, so over time surely the Foundation has solvent part of its investment in the development of IOTA from the profits obtained with the appreciation of the value of bitcoin (in August 2021 it trades around $50,000).

This is one of the strengths of IOTA because industry experts understand that the IOTA Foundation has sufficient funds to invest millions in the development of the cryptocurrency. In fact, the co-founders owned 5 percent of the tokens that were in circulation and in 2017 sold them to allocate them to what they described as “the formation of armies of willing developers in all parts of the world.”.

The main goal of IOTA is to offer fast and secure transactions between things (devices) in real-time. The idea is to enable this to be achieved with micro-transactions of up to U$S 0.001, without having to pay fees for payment processing.

Another of IOTA’s strengths is that, according to its advocates and investors, it is resistant to the inexorable arrival of quantum computing. What is this? Quantum computing is a new level of computing because it will surpass the speed of solving processes to unthinkable levels. Thousands, millions of times faster than today.

This, it is believed, could hurt all mining-based cryptocurrencies proof-of-work, which would become obsolete and vulnerable to “quantum attacks.”

On the contrary, it would not affect IOTA (always potentially, because no one is certain that this is the case), since in the Tangle system a hack of this nature would only amount to issuing millions of IOTA transactions at high speed. Something that would be a benefit to the network.

The problems IOTA has had with security: advantage or weakness?

One of the weaknesses IOTA may have is its security. In general, its detractors do not talk about speed, nor about the potential in the internet of things, nor about insignificant commissions, but about one of the key points of cryptocurrencies: vulnerability.

In 2017, shortly after being launched, IOTA endured a wallet hack that produced a price crack. This security breach caused it to lose a lot of transaction volume and, above all, support from large companies, as they feared that the network was not yet mature enough.

In fact, before the hack, it occupied a privileged place among the main cryptocurrencies (it reached the top 5), with a market capitalization of more than $12.5 billion.

In February 2020, it suffered another attack, so IOTA Foundation had to shut down its entire network for a week after hackers exploited a vulnerability in the network’s official wallet application to steal user funds.

To avoid further problems, IOTA updates periodically its protocol to give the network better performance and, spatially, stability and security in the system.

The latest update, IOTA Chrysalis, occurred in April 2021. The cryptocurrency moved away from the protocol it had and migrated to a new, more robust, and secure one, which provides new tools for programmers, companies, and exchange houses.

At what price can you buy IOTA, how has its price evolved?

The price of IOTA (or MIOTA) had its peak in December 2017, when it became worth almost $5.4. At that time, the explosion in price (+1,400% in less than a month) was founded on the partnership with some of the big tech companies, such as Microsoft, Audi, Volkswagen, and Fujitsu, for example. (Here you can find the most important partnerships held by IOTA.)

Although the deal fell through, the mere fact that the Bill Gates-founded giant turned its attention to IOTA served to add a broad “community” to the cryptocurrency.

Since then, the price of IOTA lived years of lethargy (below $0.50), until at the beginning of 2021 it “woke up”, in parallel with many of the other altcoins in the crypto ecosystem.

It made its new peak in April 2021, when it reached $2.53, less than half its all-time high. This data, for advanced traders, is the main signal that says it has huge potential to grow.

Is it a good time to buy IOTA?

In the last few days we have been able to observe how a huge volume of buyers entered IOTA, making its price soar to $2.4 (a +140% growth in 4 days). If this trend continues, IOTA could imminently test its peak reached in 2021 ($2.7). 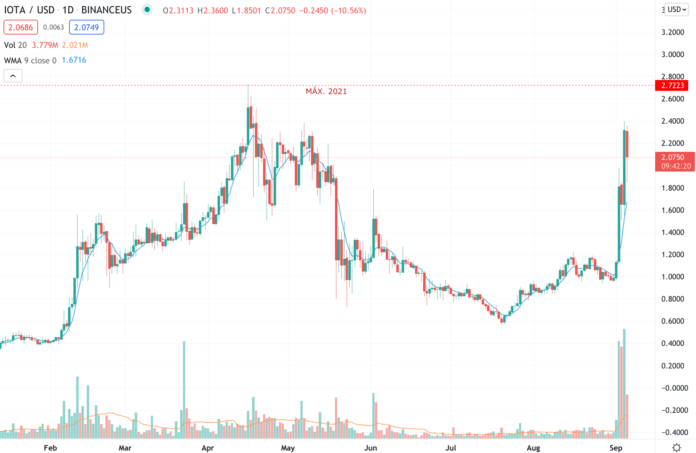 If this previous high is broken and if the uptrend continues to dominate the crypto ecosystem, IOTA with high probability will start a run in search of its 2017 all-time high (around $5).

In other words: from a perspective based on technical analysis and considering the bullish winds in the crypto ecosystem, everything points to the fact that we are facing a good opportunity to buy IOTA, with considerable potential returns ahead.

How to buy IOTA right now with a regulated broker

If you want to buy IOTA (MIOTA), the favorite option recommended by Investor Times is the broker eToro.com, an investment platform used by more than 20 million users, based in London and authorized by CySEC and the FCA (the UK regulator).

Legal and Risk Warning: eToro is a platform that offers CFD and non-CFD products. 68% of retail investor accounts lose money when trading CFDs with this provider. You should consider whether you can afford to take the high risk of losing your money. Cryptoassets are highly volatile and unregulated investment products. They do not have EU investor protection. Your capital is at risk. Other fees apply. For more information, visit etoro.com/trading/fees.

When it comes to buying cryptocurrencies like IOTA, eToro offers us great advantages over its competitors: It is one of the few regulated brokers that allows us to invest in real cryptocurrencies and not in derivative products (such as Contracts for Difference, which have higher risks and commissions).

Another important point in favor of eToro is that it allows you to add funds to your account immediately by credit card, Paypal, or bank transfer (among others). Within minutes you can deposit funds and invest in IOTA or other cryptocurrencies.

> Create your free account at eToro.com to buy IOTA <

Legal and Risk Warning: eToro is a platform that offers CFD and non-CFD products. 68% of retail investor accounts lose money when trading CFDs with this provider. You should consider whether you can afford to take the high risk of losing your money. Cryptoassets are highly volatile and unregulated investment products. They do not have EU investor protection. Indicative prices for illustrative purposes. Past performance is not an indication of future results. Trading history presented is less than 5 full years and may not be sufficient as a basis for investment decision. eToro USA LLC does not offer CFDs and makes no representations and assumes no responsibility for the accuracy or completeness of the content of this publication, which has been prepared by our partner using specific information not publicly available about eToro. Your capital is at risk. Other fees apply. For more information, visit etoro.com/trading/fees.